The Year of Dragon is on the way from tienmimi on Vimeo.
Posted by Lin-lin at 21:50 No comments:

Photos taken by Joseline, Emily, Kelly, Lilian and Lee
Posted by Lin-lin at 15:29 No comments:

5-3 寒假作業 Snow posters about various topics made by E28

Today is the last day of school prior to the Christmas break.  We will resume school on January 9.  We have completed our snow posters about various topics to do with snow.  Here is the students work:

Welcome to Lloydminster!
Hello Taiwan! This is a picture of our Lloydminster Border City sign. It is called “Border City because it separates Alberta from Saskatchewan.

SNOW REMOVAL
In our project my group learned that we use 1.1 million dollars in the snow removal jobs around Lloydminster each year.   They use different sized buckets and they can use a broom also.  They do this because it is safer to drive on cement than ice.  A set of tires is about $2000 including taxes.  The city pays for most of the gas, tires and snow removal machines.  The town uses different machines like big and small and some use bobcats.

Winter sports
Hi this is our winter sports poster. Some winter sports might be: skiing, skating, ice fishing, sledding, snowboarding, hockey and curling.
Ice fishing
Ice fishing is when you drill a hole in the ice and go fishing for big fish.
Skating
Go on the ice with a pair of skates on your feet and a helmet on your head.
Sledding
Sledding is you go down a hill really fast it is really fun.
Snowboarding
You go down a hill and try to keep your balance it is tricky.
Skiing
You use poles to move they have tracks for it.
Hockey
Is skating with equipment it is not very different from skating at all.
Curling
is sliding a special kind of rock across the ice. 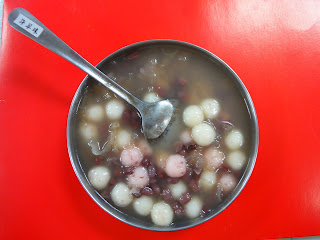 December 21
The picture above is the snack of  our lunch today, a bowl of sweet rice ball.  It means something in this season.
Tomorrow (Dec. 22) is "Dong-Jr" (Winter solstice) on lunar calendar, we eat sweet or salty rice ball and it is an important day in Chinese society.  After we eat rice ball, it means that everyone comes across a year (Your age will be added one year more, for instance, yesterday you were 11 and after Dong-Jr you become 12).  At night, every family eats different kinds of rice ball, and your e-pal class will take some photos for you tomorrow night and I will present them as soon as possible.
We have watched the news reports and we are very excited and hope to learn from you more.  Thank you for all the video taping and news recording from your part.  Your classroom setting is so cool, so different from ours and we are all very interested in your sport in winter and activities....Keep in touch.

Winter solstice on northern hemisphere.
The winter solstice occurs exactly when the axial tilt of a planet's polar hemisphere is farthest away from the star that it orbits. Earth's maximum axial tilt to our star, the Sun, during a solstice is 23° 26'. More evidently from high latitudes, a hemisphere's winter solstice occurs on the shortest day and longest night of the year, when the sun's daily maximum elevation in the sky is the lowest.[2] Since the winter solstice lasts only a moment in time, other terms are often used for the day on which it occurs, such as midwinter, the longest night or the first day of winter.
The seasonal significance of the winter solstice is in the reversal of the gradual lengthening of nights and shortening of days. Depending on the shift of the calendar, the winter solstice usually occurs on December 21 to 23 each year in the Northern Hemisphere, and June 20 to 23 in the Southern Hemisphere.[3]
Worldwide, interpretation of the event has varied from culture to culture, but most cultures have held a recognition of rebirth, involving holidays, festivals, gatherings, rituals or other celebrations around that time
Posted by Lin-lin at 13:02 No comments:

"On December 14, our e-Pal project was featured on the local Lloydminster Newcap News.  The piece is called “Beyond the Classroom” of which features cool things happening in schools in Lloydminster.  It was really exciting to have E28 and our Taiwanese friends featured.  We have uploaded a portion of the news cast for your enjoyment.  The segment can be viewed at approximately the 2:39 minute mark of the clip." Mr. Justin Saulnier
親愛的同學們 我們的e-pal交流及國際間的學習情形已經在加拿大的Lloydminster地方電視台播出了!  E28的同學很努力在學習有關台灣的文化和地理常識喔!  我們也要一起努力,增進我們對Lloydminster的地方知識及文化了解,進而培養我們文化欣賞及交流的能力喔!  老師也從中學習到許多新奇的事物. 我們一起加油.吧!
Posted by Lin-lin at 09:21 No comments:

What a wonderful song!!! You sang the truth of a naughty kid and you danced and acted so cute as well! Thank you, E28 and Mr. Saulnier for this lovely song and helping my students learn the very "meaningful' lyrics from it. I will discuss with my students next week what to do for you in order to compensate for your "confession" via the song. Ha.ha.ha..well, just kidding. I am much moved and have a lot of fun by watching your performance. You folks are great!!!
Posted by Lin-lin at 22:37 No comments:

A Glimpse of G5-3 in Sports Meet


Special thanks to Ms. Liang and Mr. Shu who videotaped and edited the video for E28, Queen Elizabeth School, e-pal of G5, Class 3 of Fo Gong Primary School.
感謝 5-3導師梁畢玲和徐銘謙先生錄製的5-3運動會集錦,以及李通華老師的轉檔協助!!!


The Preliminary Contest of tug-of-war
This coming Saturday (Dec. 10th) is our annual Sports Meet, a big event in our school.
Boys of G5, Class 3 (5-3) won two rounds in a row. They will attend the final competition with G5, Class 1 on Saturday. (We have 6 Classes in Grade 5)
Girls of G5, Class 3 (5-3) was beaten by G5, Class 4. However, they maintained good manners which also made teachers feel proud of them.
Special thanks to our ICT teacher Steven Lee who helped us record the big event of the class.
Posted by Lin-lin at 20:55 No comments:

Data of Cianjhen District by Emily and Sharon (5-3)

It is 3:50 p.m. Taiwan time and the end of the last class on Monday (you can see they bring their school bags to the English classroom). We are watching your lovely introduction films and they, your e-pal class (G5, Class 3), want to sing a song for you. Their class introduction would be on line when they finish video recording. Our anunal sports meet is on this coming Saturday and they are also busy preparing sport contests such like relay race, ball throwing and tug-of-war. We will take some photos for you of course.

Lin-lin
Kaohsiung, Taiwan
Hi friends! We are kindergarten and grade 1-6 (age 5-12)students in a public Primary School, Kaohsiung. Welcome all teachers and classes in the world to interact with us and feel free to leave your friendly comments and messages.